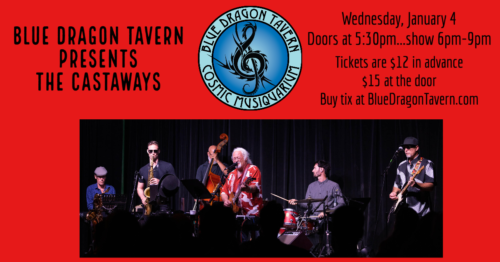 The Castaways is a surprising group of musicians from Hawaii Island that travel across the musical boundaries with their multi-cultural, cross-generational and “genre-neutral” style. They have been playing together more than 5 years, and released their first album last year – called LOST ON PURPOSE, featuring all original material. Join them for a unique musical experience, and wear your dancing shoes! More info at <thecastawaysmusic.com>. FYI – This will be their last performance with beloved drummer Noa Eads….

Richard Russell plays guitar, sings lead vocals and writes most of the songs that the band performs. His music has a message, whimsy and statement about life. Originally from the Puget Sound area, he has lived on Hawaii Island since the “turn of the century” and runs Studio Kumau, where several albums have now been recorded.  Richard is a businessman, cattle rancher, musician and producer. Richard is an instigator for the Castaways, Red Water Trio and Ricardo & Friends; and supports artistic, environmental human causes all over the world. More information at: <ricardorussell.bandcamp.com>.

Jesse Snyder is a multi-instrumentalist, arranger and vocalist. He plays tenor and baritone saxophones, clarinet, flute, drums and has a smooth baritone singing voice.  He received a 2018 Hoku Award (Hawaiian Grammy) for Jazz Album of the Year with the Hawaiian swing band, Kahulanui. Originally from the Philadelphia area he has enjoyed living on Hawaii island for a dozen years, and nowadays performs regularly at the Mauna Kea Resort. In 2020, he released his first solo album MUSE. More at <jessejsnyder.com>.

Alex Czerny is a concert pianist and journalist from Germany. He worked as a studio musician on more than 50 CDs, played in classical orchestras in Berlin, Barcelona, and Istanbul and toured with Rock/Pop bands throughout Europe. Alex came to Hawai’i in 2008 and works as a piano teacher and piano tuner/technician.

Pat Eskildsen is an energetic and well-known guitarist, bass player and vocalist from Kahaluu, Oahu. He attributes his start in the music business to his dad, a prolific performer and his singer mom.  He enjoyed rocking out with his first band Native Roots so much that he became a career musician. He is one of the core four musicians for the Hoku-award winning band, Kahulanui.

Brian McCree plays acoustic bass and also composes songs that the Castaways play. He received a 2019 Hoku Award with Larry Dupio. He is originally from Louisville, Kentucky and comes from a long history in the Boston jazz scene. He has performed at John Coltrane Memorial Concerts, the Toronto Jazz Festival, and the Detroit Jazz Festival. Brian has produced one album of original jazz, and has another one in the works. He currently performs with a number of bands around Hawaii Island. 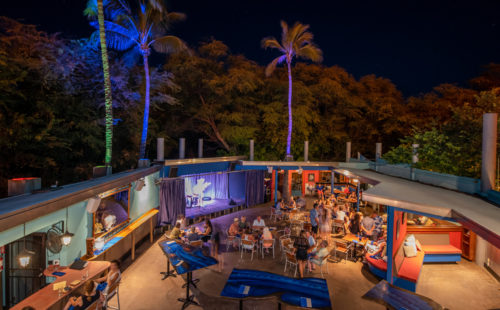